Calling all theater and musical buffs...this is an event you won't want to miss!
Join CHPT on Friday, September 16 as Debra Dickinson, Professor of Opera Studies at Rice University, presents a fascinating discussion about Broadway’s long-running, mega-musical sensations. She will explore this high-tech, international phenomenon through lecture and video with a look at audience favorites such as Cats, Phantom of the Opera, and Les Misérables. In addition to a discussion about how these blockbuster shows were created, Debra will recount her experiences as an actress in the German language production of Cats in Vienna, Austria.
Doors open at 6:30 p.m. and the presentation will begin at 7:00 p.m. Adult admission is $20 and child/student admission is $10. Tickets may be purchased online or in the Chamber of Commerce office through Wednesday, Sept. 14.
CHPT Lecture Series: Broadway's Mega Musicals is proudly sponsored by AL&M Building Supply.
About the Presenter:
Debra Dickinson’s career encompasses a wide range of projects, from being a stage director and acting teacher at the Shepherd School of Music at Rice University in Houston for the past 26 years to being a guest director/choreographer/acting instructor at various opera companies. She began her directing career as Associate Stage Director at the New York City Opera, under the auspices of Beverly Sills. Ms. Dickinson was a professional actress in New York prior to beginning her career as a stage director. Her numerous credits include performing the role of Guenevere in Camelot opposite Richard Burton and Richard Harris and appearing in the Vienna German-language production of Cats. She is also a lecturer at the School of Continuing Studies at Rice University, where she specializes in classes about musical theater. 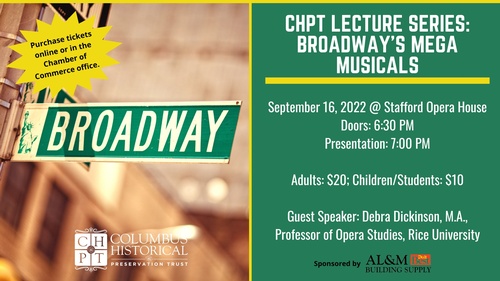