Clarence Rainer, owner of Sonic Drive-In joined the Sonic forces in 1985 and came to Columbus to open his first Sonic. He currently owns 5 Sonics. Columbus, Wharton, Palacios and two in North Carolina. Clarence oversees the Sonic in Columbus, his son the one in Wharton (in operation since 1995) and his daughter the one in Palacios open since 2001.

Sonic started out on Fannin Street in 1985 and moved to the current location in 1993. Clarence says he owes his success to the people of Columbus and he has been very happy to serve the community and enjoys the versatility of Columbus. Clarence said that Sonic can make about 189,000 different drink combinations, but the #1 special is Cherry Limeade. Happy Hour is 2-4 pm everyday and sometimes all day long. They also offer .99 cent drinks from 6-10 am each day. Order ahead and get 1/2 price drinks and slushes all day long with the Sonic app. 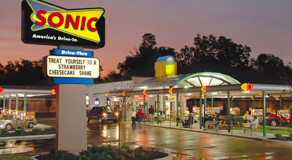