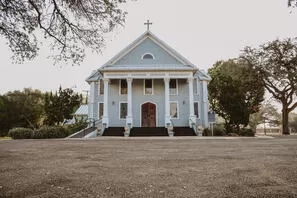 From Columbus, drive 9 miles north on FM 109 to Church Lane in Frelsburg and turn right onto Church Lane. The church is visible from FM 109.

Pioneer German Immigrants who settled in the area in the early 1830s founded Saints Peter and Paul Catholic Church about 1843. The congregation originally attended services held by itinerant priests known as ''Saddle Bag'' priests, including the Rev. John Odin and the Rev J.P. Oge. A log sanctuary was built here in 1844 and in 1847 the church became an official parish. The Rev. J.A. Jacobs served as its first resident priest. A cemetery was established here in 1847 with the burial of Gertrude Schemmer Halfmann.
During the early 1850s, the church was led by the Rev. Peter V. Gury and had become the principal religious institution for settlements as distant as 50 miles. Galveston Bishop John Odin and the Rev. Gury founded the first Catholic Seminary in Texas here in 1854.
The church erected new sanctuaries here in 1861 and again in 1912. The 1912 structure was destroyed by fire in 1926 and replaced with this sanctuary which was completed in 1927-1928. The building exhibits classical features such as Corinthian columns, dentils, and pedimented gable ends. Other prominent features of this building include Gothic windows and Tudor-arched double entry doors. Saints Peter and Paul Catholic Church continues to serve the community. Sts. Peter and Paul is in the Diocese of Victoria in Texas and Very Rev. Robert E. (Bob) Knippenberg, V.F. is the current Pastor.